Standing up for Thriving Indie Business

It is Independent’s Week! For most, that means celebrating the founding of the United States, but here at Local First, it also means celebrating our local, independently-owned businesses. We’ve said it before and we’ll say it again, independent businesses are the backbone of our communities. In addition to employing almost half of the workforce in the United States, they also generate more tax-revenue for local municipalities with less cost per acre than big box retailers. By supporting our independently, locally owned businesses we are putting more money into our public budgets, which leads to better public services. The social fabric of a community is also tightly coupled with the health of its independent businesses. Research has shown that communities with a larger share of local businesses have more social capital, stronger social ties, higher levels of civic engagement, and better success solving problems. Higher civic engagement leads to community-led solutions to issues that our friends, neighbors, and families face–like the effects of climate change, housing, healthcare, and more. We see this every day in La Plata County as our business and community leaders work together to support the community. 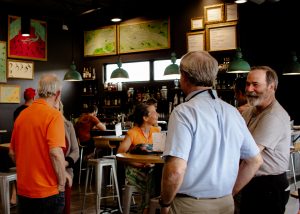 Thriving local economies are the result of a strong and diverse small-scale business community. Diversity in business promotes further growth and innovation, inspiring local entrepreneurs to start companies and organizations that solve unmet community needs. Local businesses are more likely to invest back into the community and mentor local start-ups. When new start-up founders build relationships with local partners and seek out the resources available in their local environments to address local problems, they become more established in the local economic ecosystem and are more likely to survive their first few years in business. This growth and innovation only further strengthens the diversity of the local economy and the cycle repeats itself. Furthermore, buying locally supports jobs and businesses throughout the local supply chain. Between March 2019 and March 2020, small businesses accounted for 99.7% of the net increase of jobs in Colorado, according to the Small Business Administration. 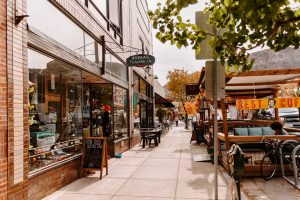 Some may argue that online retailers that enable small businesses to do sales digitally are increasing sales for those small businesses, but partnering with major e-commerce conglomerates has big consequences. “Amazon pockets 34% of each sale made by independent sellers on its site. This is an increase from the 19% collected in 2014. As a result, almost 70 percent of businesses surveyed reported that it has become harder to succeed on the platform, with 62% saying it was not possible to build a successful brand on Amazon,” according to data collected by ILSR. In addition, e-commerce is built on a system that enables data mining by host websites. “While Amazon publicly touts its sellers as ‘partners,’ within the company it refers to them as ‘internal competitors.’ It spies on sellers and appropriates data about their sales, costs, and suppliers. It then uses this information to create its own competing products, often giving its versions superior placement in the search results,” according to ILSR. E-commerce giants make huge profits exploiting and overcharging independent sellers. These profits allow tech giants to undercut competition and sell goods and services to consumers at a major loss.

As you can see, it is not a level playing field for independent businesses in the United States. This year, we not only celebrate our resilient indie businesses and their hard work, we also encourage you to continue to support them. Not just with your dollars, but with your voice. After years of allowing unchecked mergers, there is movement at the federal level to begin putting a stop to exploitative practices that enable monopolies to consolidate power. With new leadership in the Federal Trade Commission and Department of Justice committing to revising our nation’s Merger Guidelines to cut back on monopolies and anti-competitive behaviors as well as the American Innovation and Online Choice Act gaining bipartisan support in congress, the reality of a prosperous future for our independent business community is still a viable one. If you want to stay informed on the legislation, sign up for Local First’s newsletter and in the meantime, talk to your local, state, and federal representatives about your concern for independent business opportunity. Together, we can keep our businesses and communities thriving.